by Chris Maykut on June 29, 2011
in PhinneyWood Neighborhood

A very observant bar employee led police to a suspect in last week’s abduction and rape incident in Greenwood. 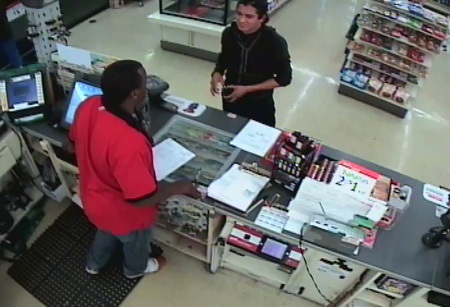 On June 28th, at approximately 10:15 PM, North Precinct officers responded to a 911 call from an employee at a bar in the 8500 Block of 15th Avenue NW. The caller stated that he believed one of the patrons inside the bar looked very similar to the suspect depicted in surveillance photos released to the media last week from the Greenwood abduction and rape incident. Officers arrived and contacted the suspect. The officers asked the suspect to step outside so they could talk. One of the responding officers had responded to the original incident last week, so had detailed knowledge of the investigation. The suspect professed to not knowing much English, so the officer pulled up a picture of the suspect from a media site on his cellphone and asked, “Is this you?” to which the suspect replied “yes.” The officers quickly took the suspect into custody and during a patdown of the suspect recovered a loaded handgun in the suspect’s waistband.
A second suspect was with the first suspect inside the bar, but it was determined that the individual did not match the description. That second individual was interviewed and released from the North Precinct. Officers located the suspect’s car nearby and it does match the description of the suspect vehicle used in the abduction/rape. The car was impounded for processing. Detectives from the Sexual Assault Unit responded and interviewed the suspect at the precinct.
The 24 year old suspect was later booked into the King County Jail for Investigation of Rape. The second suspect in this case is still outstanding. Anyone with information on that suspect is asked to contact the Seattle Police Department Sexual Assualt Unit at (206) 684-5575.