by Doree on May 5, 2011
in PhinneyWood Neighborhood

Three months ago she made her rounds on the internet, in the YouTube video of her three-week check-up (above.) Since then the staff has been monitoring her growth, progress and making sure she hits all her benchmarks. 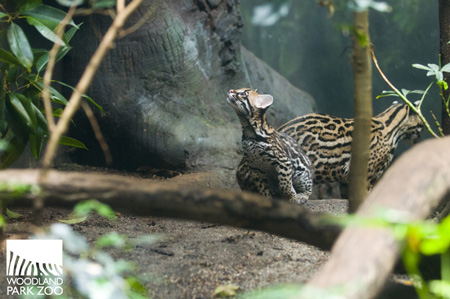 Photo courtesy: Ryan Hawk/Woodland Park Zoo
Now Evita is ready to make her first public appearance in the Tropical Rain Forest exhibit. According to the zoo, the best times to view the kitten and mom are between 11 a.m. and 2 p.m. where you might see her doing her favorite activity – chasing her mom’s tail.

Here’s a little about the ocelot:

An endangered species, ocelots are small spotted cats that range throughout Mexico, Central and South America to northern Argentina, with remnant populations in the southwestern United States. The secretive, nocturnal cats are three to four times the size of an average domestic house cat, weighing on average 24 to 35 pounds and averaging 2½ to 5 feet in length. They may be found in several different kinds of habitats, from jungle areas and tropical rain forests to dry scrub and chaparral zones. In the wild, ocelots continue to lose ground with their ever-shrinking habitat and black market pet trade. Today, only 100 or so are thought to remain in the U.S.

Next post: Opt out of phone books delivered to your home beginning today