by Guest Writer on December 19, 2008
in PhinneyWood Neighborhood

Seattle Department of Transportation crews are moving from major arterial streets to what they call “secondary” arterials including 80th, 65th and 3rd Avenue NW. Here’s their map of plowing routes, with major arterials being the solid lines and dashed lines being the secondary routes: 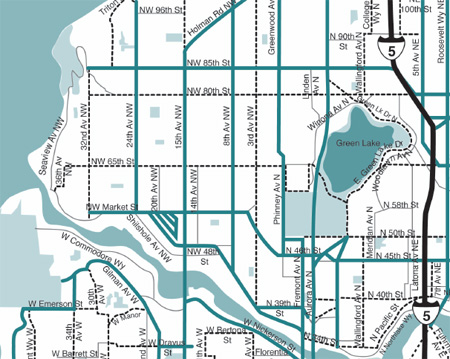 According to SDOT, they plow loose snow to the center of the road to avoid blocking drains and driveways. Sand and de-icer go down next, focusing on spots where stopping is a challenge, including intersections and on steep hills.

It looks like it’ll be a while, if at all, when they try to tackle NW 65th Street on the west side of Phinney Ridge. There were some people sledding on the road a couple blocks uphill from 3rd Avenue NW, which was pretty much covered with compact snow and ice just before noon. Barely visible behind the closure sign is a crumpled kiddie pool which probably met its demise while being used as a sled.

When the next storm comes Saturday night, they’ll shift back to the major arterials, including Greenwood Avenue, 85th and 8th Avenue Northwest.

Previous post: Check to see if your bus is running