by Chris Maykut on December 18, 2008
in PhinneyWood Neighborhood

Update 8:20 p.m. Sam Thompson, the ultra-runner, completed his library journey a short time ago, but had to skip a few of the libraries because the weather was so brutal. He promises a full recap on his blog tomorrow. By the way, Sam is famous for running 50 marathons in 50 states in 50 consecutive days in 2006 to raise awareness for Hurricane Katrina victims. He’s obviously not a man who’s going to let a little bad weather slow him down!
Update 3:15 p.m. Remember our post from last night about a Seattle man, Sam Thompson, who planned to run 60 miles between all 27 Seattle libraries today? He’s actually doing it, even with all this snow! He’s already made it to 11 libraries, including Greenwood, Fremont, Ballard and Magnolia. Check out his Twitter page to see where he’s been so far.
Update 2:40 p.m. Here are a few fun photos taken by Phinney resident Mike Veitenhans this morning on 67th St. between Palatine and 1st Ave. That’s the Phinney Neighborhood Center’s old air raid siren tower in the background. And these kids found a new use for old campaign signs. Update 1:55 p.m. Katie wants PhinneyWood readers to know about an especially dangerous road in the neighborhood:

You should let readers know that 56th Ave. NW, especially between 1st and 3rd is extremely treacherous. Every single car that’s tried to come down it has started sliding uncontrollably. Very scary.

Please post a note in Comments to let everyone know of any other roads that are too dangerous to drive on. Nobody is taking 65th from Phinney down to Ballard…too slippery. 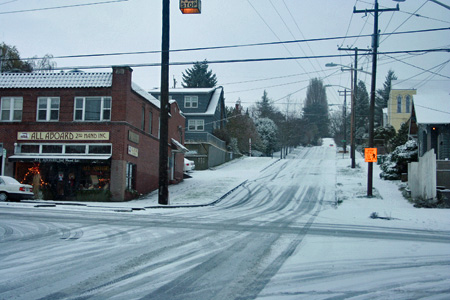 And these folks are sledding along 67th near 2nd Ave. because nobody’s driving the steepest roads. 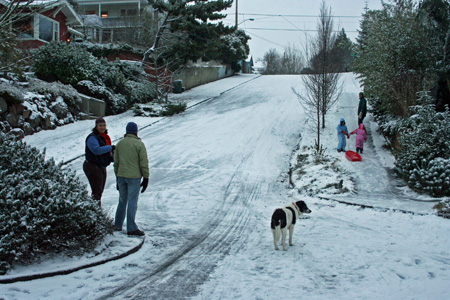 Update 1 p.m. The snow continues to fall, and there’s a good two inches on the ground. Despite the conditions, traffic is moving slowly but smoothly on Greenwood Ave. and Phinney Ave., as well as along 85th. This is looking south down Greenwood Ave. near 77th. The roadways are still very slick, especially as the snow becomes more packed. But many of the hills are just too treacherous to drive. So on many side streets, kids are sledding (carefully, we hope) and having a good time. Here on 85th and Greenwood, a man is toting a Christmas tree. A woman walks to the bus stop in front of the Lutheran Church on Greenwood. Have snow photos? Send them to [email protected]

Next post: Check to see if your bus is running