by Doree on September 13, 2008
in PhinneyWood Neighborhood

In a monthly meeting of 36th District Democrats on Thursday night, John Burbank received 74 percent of their vote for the “sole endorsement” of his campaign for the state legislature. “The overwhelming endorsement of the rank-and-file membership of the 36th District Democrats indicates that as we approach the General Election, Democrats have taken a much closer look at this campaign and the difference between the candidates,” Burbank explained in an email to supporters and the press. “Clearly, they see our campaign as the one that can deliver real change for the families of our district and our state.” 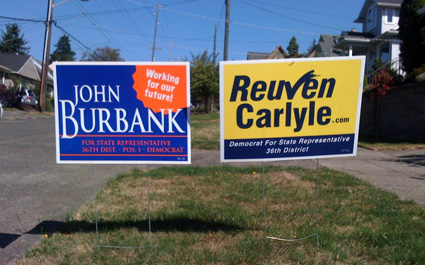 But fellow Democrat Reuven Carlyle came out on top in August’s top-two primary, receiving 44.5 percent of the vote to Burbank’s 40 percent. So why the big discrepancy? “Instead of focusing on the 85,000 voters of our district, my opponent — a 30 year lobbyist, latte tax sponsor and campaign aide — worked behind the scenes to pack a church basement with an extra 40 people to give him a sole endorsement of the local party organization,” Carlyle told us in an email today. “No amount of 1980s style, behind the scenes, insider political party games from my opponent is going to change the results of that election.” Carlyle and Burbank will face off in November after possibly the most expensive and contentious legislative race in our state’s history.