by Chris Maykut on August 12, 2009
in PhinneyWood Neighborhood

A water main break at Greenwood Ave. and 85th St. quickly turned Greenwood’s busiest intersection into a river on Wednesday evening. Police diverted traffic around the flood zone while city crews worked to stop the torrent of water.
Update 1 p.m. Thursday: Traffic is pretty much back to normal today. The westbound curb side lane on 85th is closed off with traffic cones for about 50 feet, and there’s a layer of dried mud over the sidewalks:

See the story as it evolved below:
Update 8:30 a.m., Thursday: All lanes are open except one westbound lane on 85th. Update 11 p.m.: The water has receded, and the intersection has reopened with the exception of westbound lanes of 85th, which are detoured south on Greenwood Ave. All that’s left is a few puddles and patches of mud, but city crews are still working on the hole surrounding the break site. This is the culprit: an eight-inch water main about six feet underground just a few feet off the northwest corner of the intersection.
Update 7:15 p.m.: (From Dale) Some other businesses say they’ve got water seeping in and they’ve got brown water coming out of their taps. Water was seeping into a back room at Antika and the basement of Greenwood Academy of Hair. It didn’t help that every vehicle coming through the intersection sent up a wave of water (as Rachel describes below) until the police blocked traffic. Minutes before police closed 85th, Beckie at Antika watched as wavelets lapped at the front door, saying the water rose quickly. “All of a sudden it started filling up the street.” This motorist anxiously waited for the light to change. A crew from Seattle Public Utilities methodically shut off valves around the leak. This was one of the easy ones. At least one was well under water, according to an employee. Jason Greekas said he was having dinner with his family around the corner at Romio’s when they “saw the river flowing by” on Greenwood Avenue. Standing at the intersection, he watched water pushing up through cracks in the road on the north side of N. 85th Street outside the Greenwood Academy of Hair.

“Cars were just riding over it,” he said in disbelief as water undermined the road. “Why chance it?”
Update: 6:50 p.m.: The water department says an eight-inch water main broke. Luckily, that’s dirt and not sewage you see in the photo. Crews are headed to the scene, but it could take up to four hours to repair, so it’s best to avoid the intersection of 85th and Greenwood for the rest of the evening.
Update 6:30 p.m.:Dale is on the scene and reports that the intersection is flooded between Antika and Greenwood Academy of Hair. Police just arrived to block off the street to traffic.
6 p.m.: The intersection of 85th St. and Greenwood Avenue is flooded because of a broken water main. 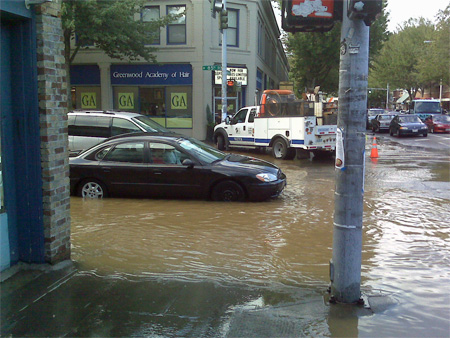 Rachel writes in comments that the break happened just as she was getting off the bus at the intersection:

I was on the westbound 48 bus pulling up to the curb on the north side of the street at 85th and greenwood at around 5:45 or so, just as the main was breaking. Looking out the bus window, a wash of foamy brown water was running along the side of the bus, everyone about the step out the back door and looking down was like, “What??” the water was already too wide and deep to step clear out of the rear bus exit. everyone went up to the front. Within a few seconds after I jumped off the bus the water had risen high enough to make it impossible to cross 85th… I headed west on 85th instead, away from the water break, but got caught in the rising water anyway. i ducked into the szechuan place along with one of the staff, who had come out to see what was happening, but the wake of cars plowing through the water pushed the water all the way across the sidewalk and under the front door into the restaurant, to the chagrin of the women working there. ugh. quite a scene. it happened very fast.

Previous post: Girls on the Run looking for coaches