by Guest Writer on October 14, 2008
in PhinneyWood Neighborhood 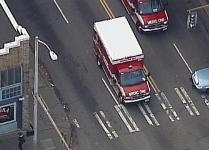 Two pedestrians have been hit while crossing the street near the corner of 85th and Greenwood. Police have closed 85th Avenue between Palatine and Greenwood avenues. Thanks, Steve, for the tip.

This is what Steve saw:

Two people were struck by a car while crossing the street after leaving Gorditos (not in a crosswalk). One of them looks to be in critical / unresponsive condition. Late teens / early 20s, I’d guess.

A couple TV choppers are over the scene of the accident, which happened at about 4:10 p.m. According to our sources, two males were transported to Harborview. One was alert and sitting up. The other was knocked unconscious, but later regained consciousness.

Two teens, who appeared to be about 14 and 15 years old, were hit by a small Mazda hatchback while running across the street between Gorditos restaurant and the Green Bean Coffeehouse. According to the driver, he was travelling about 30 miles per hour when the teens darted in front of him. Although he slammed on his brakes and swerved to avoid them, both were hit.

Medical response arrived quickly and in force. Both teens were treated at the scene, eventually moved to stretchers, and then taken to Harborview in separate ambulances.

More details here on KIRO’s site (Photo from KIRO-TV’s chopper). If anyone has more details or photos, please send them to [email protected].

Update, part 2: Police now say the two teens were running to catch a bus and didn’t see the westbound car.