by Chris Maykut on January 17, 2012
in PhinneyWood Neighborhood

Update: Wednesday night’s School Board meeting has been postponed to Jan. 25 because of snow.
Earlier: of Whittier Elementary School’s PTA plan to attend Wednesday night’s Seattle School Board meeting to oppose a proposal to add a fourth kindergarten class next year. Whittier, which is at 13th Avenue NW and NW 75th Street in Ballard, currently has three kindergarten classes of 23 students each. 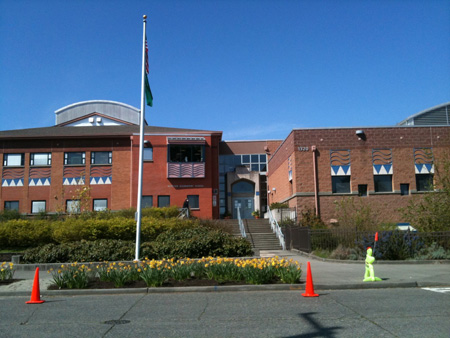 Whittier Elementary on a sunnier day
Whittier’s boundaries include the very western edge of parts of Greenwood and Phinney Ridge.
The School Board is dealing with capacity issues at north end schools, and the fourth kindergarten class is part of a larger proposal to deal with overcrowding.
If the Board votes to add a fourth kindergarten class, the school would lose its on-site childcare program or preschool program, so that the room could be turned into another kindergarten class.
The PTA sent a detailed letter to school families today, and now families are sending around a petition against adding the fourth class, unless the district comes up with better enrollment figures and a longer-term plan.
The letter from PTA Co-Presidents Lisa Melenyzer and April Brown states that 80 percent of this year’s kindergarteners live within the school’s attendance area, and that there was no waitlist for kindergarten at Whittier this year. The two say that there is room within the current three classes to add any anticipated population growth in the next few years.
The PTA also says school capacity data does not show a need for a fourth kindergarten class, and that there is no plan for how it would affect the three existing first-grade classes the following year and the higher grades after that.
The PTA is also worried about the strain another class would add on school resources, including the P.E. and music teachers, as well as the library, lunchroom and recess supervision.
From the PTA letter:

Please note that we are not suggesting that kids in the attendance area who are entitled to come to Whittier should be turned away. We also want the siblings of Whittier families to be served, and for Whittier to be a welcoming place to the community. We simply don’t want Whittier to be appointed a fourth kindergarten – with this lack of planning and foresight – merely to help serve a capacity problem in the rest of our service area.

You can write to all School Board members by emailing: schoolboard@seattleschools.org. The Seattle School Board meets from 6-9 p.m. Wednesday at the John Stanford Support Center, 2445 3rd Ave. S., in the first-floor auditorium.

Next post: Seattle Public Schools are closed on Wednesday