by Chris Maykut on August 9, 2011
in PhinneyWood Neighborhood

The FBI and police have released photos of the two men who robbed the Key Bank on Holman Road Monday morning. 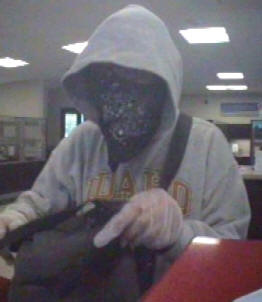 The first suspect is described as a white male in his 20s to 30s, wearing a dark bandanna over his face with a gray Idaho Vandals hoodie pulled up. He was wearing plastic gloves and a backpack. 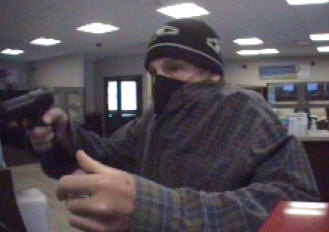 The second suspect is described as a skinny white male in his 40s to 50s (originally it was reported that he was in his 30s). He was wearing a dark blue-green flannel over shirt, black t-shirt beneath used to cover face.
Anyone with information regarding this robbery or the identification of the masked suspects, please contact the FBI-Safe Streets Task Force at (206) 622-0460.
Original post: Police searching for armed bank robbers

Next post: Amateur ‘gumshoes’ patroling the neighborhood for clues