by Doree on July 5, 2011
in PhinneyWood Neighborhood

Updated 2:45 p.m. Kiro TV is reporting that the suspect is now in custody after a landlord pulled a shotgun on a tenant while serving an eviction notice. 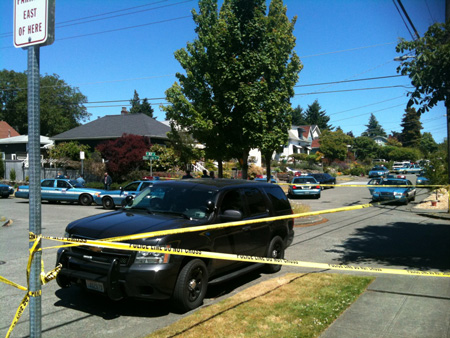 Earlier: A SWAT team has surrounded a home near Dayton Avenue North and North 83rd St. after a report of a “landlord at a Greenwood home pulled a shotgun on a tenant while serving an eviction notice,” says KIRO TV.

And here is the Seattle Police Department Blotter write-up of the incident:

On July 5th at approximately 1:07 p.m. officers responded to the 500 block of North 84th Street for a report of a man with a gun. Preliminary investigation indicates that the suspect and victim (both adult males) are known to each other via a landlord/tenant relationship. The victim was renting space in the suspect’s home and was being evicted. The victim arrived at the house to pick up some of his belongings. The suspect called the victim on his cell phone and asked the victim to come to an area in the the suspect’s portion of the house.

Responding patrol officers surrounded the house and were quickly joined by on-duty SWAT team officers. They called the suspect on his phone and convinced him to surrender peacefully. The suspect exited the residence unarmed and was taken into custody.

No shots were fired and nobody was injured throughout the incident. A loaded .410 shotgun and a .22 caliber rifle were recovered from the house and booked into evidence.

The suspect was subsequently booked into the King County Jail for Investigation of Assault.