Re-opening a school, a look at Viewlands Elementary

by Chris Maykut on May 13, 2011
in PhinneyWood Neighborhood

By Meghan Walker
Nestled just above Carkeek Park, Viewlands Elementary is slowly coming back to life. Since its closure four years ago, the school has stood empty. But now, with a new principal at the helm, Viewlands is planning for its reopening in the fall. 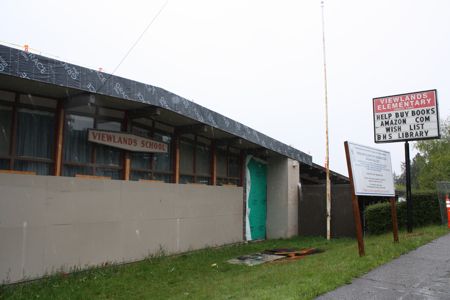 Guiding the renovation and planning is Lisa Escobar, the new principal of the school. Escobar is a seasoned school principal; she comes to Viewlands with experience working in elementary, middle and high schools.
Escobar found out she would be taking over the K-5 at the end of March. Since then, she’s been busy working with a design team to give the school a face-lift. She says it’s a very exciting thing to start a new school.
“When you go into an existing school, it already has a culture, and then you work to shape it as a leader. But when you get to create that, it’s not something that happens very often, so I jumped at it,” Escobar said.
The school needs everything from new desks to books and even a new teaching staff. Escobar said the hiring process starts soon, with six positions to fill. She wants the school to have a focus on environmental science.
“We’re working with Carkeek Park and Piper Watershed. People are very eager to get involved,” Escobar explained.
Rain gardens are being planted, and conservation will be a strong theme in the school.
“There’s an idea for a culmination project in fifth grade, where they’ll look into their (carbon) footprint, and ways to neutralize that footprint on the environment,” Escobar said. “Its an incredible opportunity to create such a dynamic learning environment.” 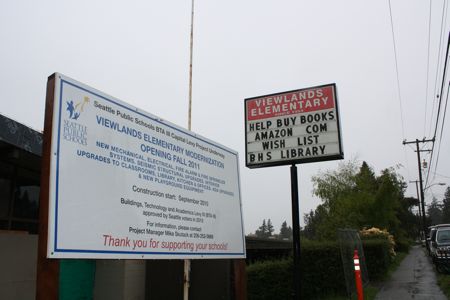 When the school closed in 2007, nearly 200 students were relocated to other elementary schools. Escobar said she was surprised to learn the history of Viewlands.
“When it closed it was hard on the community. So, there are a lot of old wounds that need to be healed, and there are people who are excited about it coming back. It’s going to be redone and it will be beautiful when it’s done,” she said.
The school will start with 130 kids this fall, with the hope that within five years, 450 kids will be enrolled. In the meantime, Escobar is busy getting ready for the new students.
“You have to order everything from paper clips to laminators,” she said. “You just have to imagine you start with nothing.”
(Contributor Meghan Walker is an intern from the University of Washington School of Communications.

Next post: Greenwood Garage Sale Day coming up May 21