by Chris Maykut on February 23, 2011
in PhinneyWood Neighborhood

Greenwood resident Mayor Mike McGinn tweeted that someone stole his wife’s bike. “I know I’ve been encouraging people to ride bikes more, but I didn’t mean u could ‘borrow’ my wife’s bike w/o asking,” he wrote, later explaining that it was stolen after he rode it to work. “Peg is pissed,” he said. 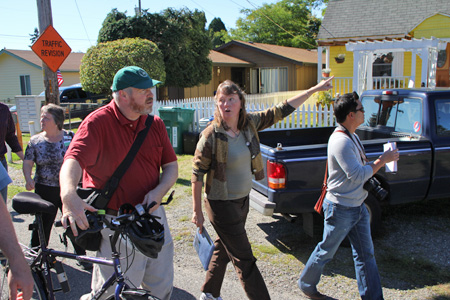 McGinn posted a photo of the bike’s make and model, which looks remarkably similar to the bicycle he rode during a walking tour of Crown Hill last fall (above.) McGinn often commutes by bike — you may remember the “Mike Bikes” slogan from his campaign — and he often evangelizes two-wheel commuting, including the city’s Walk-Bike-Ride program.
If you see the bike, well, call the Seattle Police department’s non-emergency number at the North Precinct: 684-0850.

Next post: Sponsors and volunteers needed for Greenwood Seafair Parade