by Chris Maykut on December 16, 2010
in PhinneyWood Neighborhood

Update 3:20 a.m.: The fire is out. Neighbors tell us the house has been vacant for about a year, and recently had a For Sale sign out front. The fire department tells us the fire started in the back of the house and got into the attic. Investigators are on the scene to try to determine the cause.
“It was burning at the back,” neighbor Peter Devries told us at the scene. “Great support. They (Seattle Fire) sent a lot of people.” 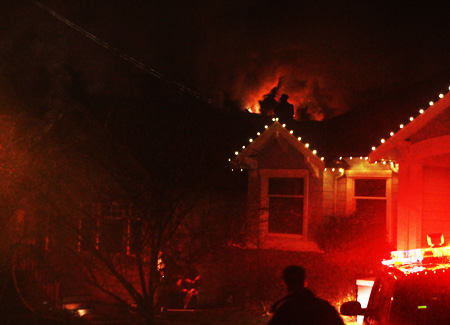 Firefighters work on the roof of the house behind the home with Christmas lights.
“It’s a reassuring thing as a homeowner when one house is five feet from the next,” Laura Devries added.
The Devries tell us the For Sale sign had recently come down and someone had been working on the house for the last three days.
Earlier: Numerous fire trucks are on the scene of a fully-involved house fire at 321 N. 77th St. on top of Phinney Ridge. The call came in at 2:53 a.m. According to Seattle Fire Real Time 911, Engines 21, 31, 35, and Ladders 5 and 8 are on the scene, as well as numerous support vehicles. 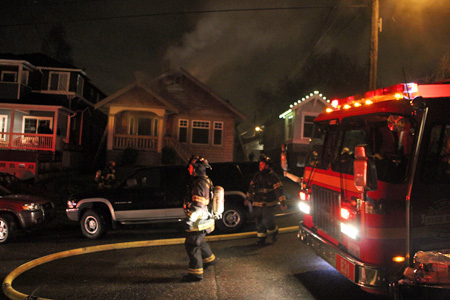 As usual, thanks to Silver for the alert and for posting updates in the forum.