News from nearby neighborhoods

by Chris Maykut on September 3, 2010
in PhinneyWood Neighborhood 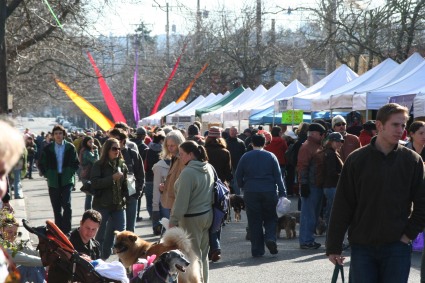 The Ballard Farmers Market was voted best farmers market in the state in an online contest sponsored by the American Farmland Trust. Ballard was the highest vote-getter by far: 1,285 votes to 257 votes for second place, the Olympia Farmers Market.
On the mobile food front, both Ballard’s El Camion and Wallingford’s Molly Moon ice cream are in the running for the Food Network’s favorite food truck contest. The winning truck receives a $10,000 prize and the opportunity to appear on the next season of “The Great Food Truck Race.”
Hamilton International Middle School in Wallingford shows off its two-year, $73 million renovation.
Construction crews will take this weekend off from closing lanes on the Aurora Bridge. Crews will continue to work Monday through Thursday nights drilling holes for the suicide prevention fence across the bridge.
Volunteers are needed to help paint a street mural in Green Lake, next to Bethany Community Church and across the street from Daniel Bagley Elementary School.
Revolution Cycles at 9634 Roosevelt Way N.E. in Maple Leaf closes its doors, but will now become a valet service for bicycle repair.
The NE 45th Street Viaduct project in Wedgwood is on schedule to reopen by Sept. 10. Fred Willard, one of the best comedic actors ever, was in Magnolia shooting a web-based commercial. Willard has starred in a number of movies, including the mockumentaries “Waiting for Guffman” and “Best of Show,” and was nominated for an Emmy for his role in the new TV series “Modern Family.”

Next post: 85th St. Cafe and Deli being remodeled

Previous post: The Olive and Grape to open next Friday