The low-down on the yellow chopper we see every day

by Chris Maykut on July 28, 2010
in PhinneyWood Neighborhood 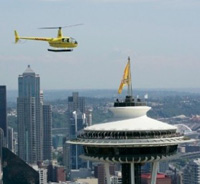 We’ve noticed a bright yellow helicopter flying over the neighborhood pretty much every day, and usually several times a day. We’ve been meaning to find out just who it belongs to, but our sister site My Wallingford beat us to it. Turns out it’s from Seattle Helitours, which gives, what else, helicopter tours of major attractions around the area.
Our sister site My Ballard followed up and found out the company has been around since the 1980s and they operate both the yellow helicopter and the blue/white one that flies the same route. The reason we’ve seen the yellow helicopter so much lately is because of recent promotions on Groupon and Living Social, which sold more than 900 tours.
(Photo courtesy Seattle Helitours.)