by Doree on July 20, 2010
in PhinneyWood Neighborhood

A large response by the Seattle Fire Department this afternoon after calls came in about an odor and someone feeling sick at the Community Resource Center – home of the Greenwood Food Bank (9041 Greenwood Ave. N.) 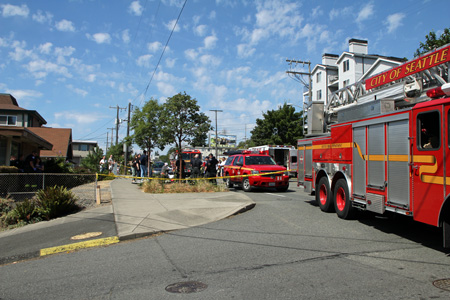 “We know this is a building where no chemicals are used, no hazardous materials, so right now what this appears to be is pepper spray,” Helen Fitzpatrick, the Public Information Officer for the Seattle Fire Department tells us at the scene. “Medics evaluated 8 people, the longer they’re exposed to the air the better they feel and no one will be going to the hospital.”