by Chris Maykut on July 14, 2010
in PhinneyWood Neighborhood

A crew is filming a movie at the Phinney Neighborhood Association building. 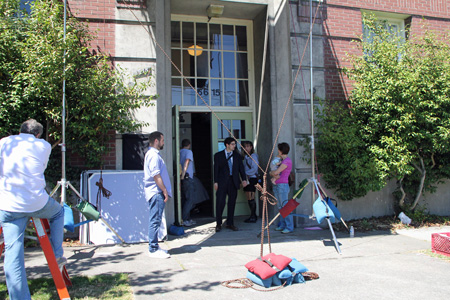 We saw actor Jason Biggs, best known from “American Pie.” The movie is called “Grassroots,” and which is about a newly unemployed journalist who agrees to help his oddball friend campaign for the Seattle City Council.
If that sounds familiar, it’s based on the true story of Phil Campbell (who used to work for The Stranger before becoming campaign manager) and Grant Cogswell, who ran for city council here in Seattle in 2001. Campbell wrote a book, “Zioncheck for President: A True Story of Idealism and Madness in American Politics,” which was adapted for “Grassroots.”
Other actors slated for the film include Cobie Smulders, Tom Arnold, DC Pierson and Cedric the Entertainer. Grassroots is directed by Stephen Gyllenhaal, father of Maggie and Jake Gyllenhaal.