by Chris Maykut on May 26, 2010
in PhinneyWood Neighborhood

The Woodland Park Zoo no longer has ostriches in the African Savanna exhibit. 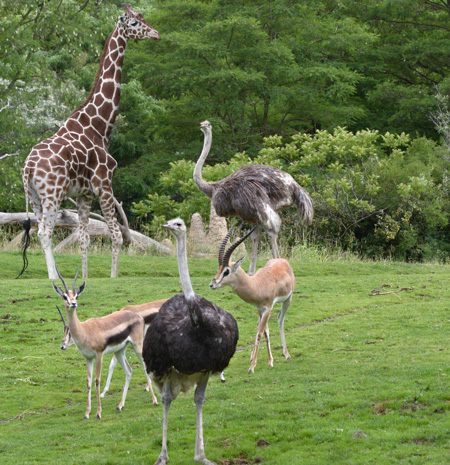 Ozzie the ostrich, shown in forefront, courtesy Dennis Dow.
This week, Ozzie the 12-year-old male ostrich was euthanized after an apparent fall into a water tub in the African Savanna. Although veterinary staff tried to stabilize him and treat his injuries, the ostrich was in obvious pain. “The bird progressively declined and euthanasia was the most humane option for this 250-pound patient,” said Dr. Darin Collins, director of Woodland Park Zoo’s Animal Health. Preliminary necropsy findings confirmed leg and head trauma with extensive soft tissue muscle damage.
The female ostrich in the exhibit was euthanized less than two weeks ago after a critical leg injury during a diagnostic medical procedure to treat a chronic fungal infection. According to the zoo, a post-mortem examination confirmed a pelvic bone fracture and a life-threatening systemic infection of the reproductive tract.
The zoo is looking into options but has no immediate plans to replace the ostriches.

Previous post: In the Red Wine Bar hopes to open in two weeks