by Chris Maykut on April 29, 2010
in PhinneyWood Neighborhood

Ballard will soon get a taste of Greenwood’s Mr. Gyros Mediterranean eatery. 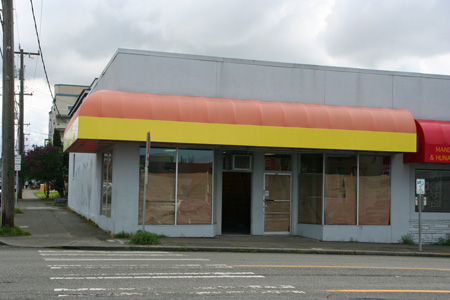 Our sister site, MyBallard, is reporting that owners Sammy and Joni Arsheed will open their second location at the corner of 20th Ave NW and NW 56th St in June. The Arsheed brothers opened Mr Gyros seven years ago at 8411 Greenwood Ave. N. The new space will be larger than the Greenwood location, but is modeled after the original, with an open kitchen, casual dining and a hard-to-miss yellow awning. “It’ll be the same as Greenwood,” Sammy says, “Bar stools and baskets. Get people in and out.” They plan on staying open late, like 2 a.m., on Fridays and Saturdays for those late-nighters who want something other than hot dogs, Sammy tells us. (Thanks Silver for the tip!)