Out of the Ashes – Taproot recovers and regroups after October arson

by Chris Maykut on January 27, 2010
in PhinneyWood Neighborhood

By Sarah Storm, University of Washington Department of Communication News Laboratory
A scant three months after the Greenwood arsons that damaged the Eleanor Roosevelt Building and neighboring businesses, Taproot Theatre is again opening its doors.
The regional premier of its new production, C.S. Lewis’ “The Great Divorce,” is this Friday, with previews tonight and Thursday. The remodeled Taproot Theatre and mural covering the safety wall in front of what was the Eleanor Roosevelt Building. (Photo by Sarah Storm)
On Oct. 23, the Taproot Theatre’s Greenwood playhouse was damaged in the fire that burned down the Roosevelt Building, which Taproot owns. The fire, ultimately ruled arson by investigators, forced the theater to postpone its upcoming holiday show, “Sherlock Holmes and the Case of the Christmas Carol.”
“At first the adjusters and contractors said it would take at least four months to get the theater ready for reopening,” said Scott Nolte, co-founder of Taproot Theatre and director of the upcoming “The Great Divorce.” “(But) we really wanted to open our 2010 season in our Greenwood playhouse.”
After discussing the dilemma with the contractors and insurance adjusters, they created an abbreviated schedule for rebuilding. This allowed for public areas of the theater to be done in time for the first show of the 2010 season.
“They’ve been working 10 hours a day, six days a week, to make it happen,” Nolte said. “There’s been a lot of work to do, and some moments it looked like it might not happen, but here we are, days before opening.”
Taproot Theatre was founded in 1976, and was mobile throughout its beginning years. Starting out as a touring company, Taproot found its home at Seattle Pacific University before moving to a church. In 1996, Taproot moved to its current Greenwood location.
Community support has been essential to the coping and rebuilding process after October’s arson.
“We have a great staff, a great community, many loyal patrons and donors and so many colleagues in the theatre community,” Nolte said. “They have helped give us the encouragement and the stamina that we need to get through this time.”
The fire in October also coincided with the last performance of Taproot’s “Enchanted April,” which was scheduled for the next day. 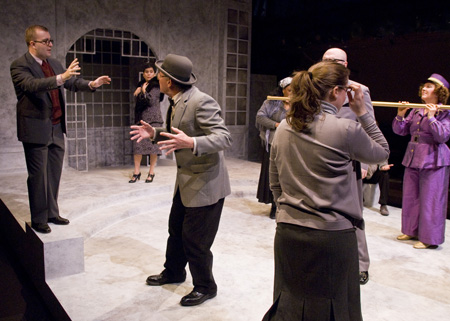 (Photo of “The Great Divorce” by Erik Stuhaug, Taproot Theatre)
Support came in from all areas of the community, said Pam Nolte, co-founder of Taproot Theatre and an actor in the upcoming “The Great Divorce.” The community of Greenwood, the arts community and the church community all pitched in and asked “What do you need?” she said.
Taproot finished its run of “Enchanted April” with the help of Seattle Children’s Theatre, which gave Taproot use of one of its auditoriums.
Taproot has given back to the community that is supporting it. Owning both the playhouse and the Roosevelt Building, Taproot had insurance that covered the cost of the fire. The theater, Pam Nolte said, had more insurance coverage than the Roosevelt Building. Taproot leased out the building to four businesses, all of which were destroyed by the fire; the tenants left with nothing. While Taproot was offered funds from the Greenwood Fire Relief Fund, they declined the money in order to give a larger share to the businesses affected by the fire.
As the Greenwood playhouse was rebuilt, Taproot Theatre found a temporary home in two local church basements, Greenwood Christian Church and Grace Fellowship, where theater staff and the actors have been rehearsing and preparing for the “The Great Divorce.”
Taproot consists of not only the main stage, which features the company’s seasonal performances, but an acting studio and road company as well.
“The acting studio didn’t miss a beat,” Scott Nolte said. “Some classes were already held offsite, and the others were relocated.”
Finding other locations for classes was a scramble, Taproot’s Education Director Sara Willy said.
“Two of our classes were supposed to perform on our stage before the holidays,” Willy explained. “We called a ton of different places about renting performance spaces.”
The acting studio ended up renting performance space from Stone Soup Theatre in Fremont. Students are really excited to have class back in the original Greenwood playhouse.
It was heartbreaking for a lot of the students,” Willy said of the October fire. “A lot of kids especially feel an ownership over the theater because they perform there in the summer; they feel really connected with it.”
Classes at Taproot’s acting studio start up again at the end of February.
“The Great Divorce,” based on the novel of the same name by C.S. Lewis, features the narrative of a journey through hell to heaven. It was adapted for the theater by George Drance and the Magis Theatre Company. The Taproot production features 10 actors portraying 25 characters. (Photo of “The Great Divorce by Erik Stuhaug, Taproot Theatre)
“The Great Divorce” runs through Feb. 27, with a “pay what you can” performance on Feb. 3. Taproot Theatre’s next production is “Brooklyn Boy,” which runs March 17-April 17.
(Contributor Sarah Storm is a student in the University of Washington Department of Communication News Laboratory.)