by Chris Maykut on January 26, 2010
in PhinneyWood Neighborhood

Next Tuesday, Feb. 9, when ballots are due for the special election, don’t head down to the Ballard Neighborhood Service Center (5604 22nd Ave NW) to drop off your ballot like in the past (shown below). There will be no drop box. 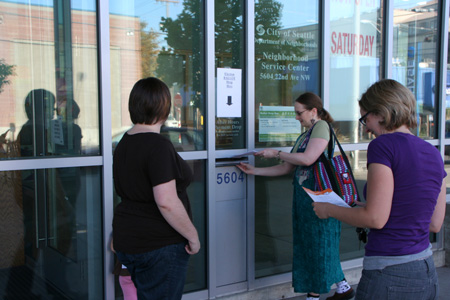 Because of the tight budget, drop boxes in all but two locations have been eliminated. “King County had to make some hard choices to balance the 2010 operating budget,” King County Elections Director Sherril Huff said. “This included cuts to all departments in services that citizens want and depend on. As a cost savings measure, Elections was asked to reduce the number of ballot drop boxes as well as the operational hours of accessible voting centers.” 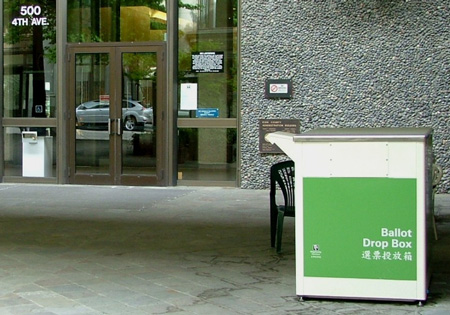 If you want to drop your ballot off in person, you’ll need to go to the King County Administration Office at 500 4th Ave (shown above) or the King County Elections headquarters at 9010 East Marginal Way S, Tukwila. King County also has three accessible voting locations, one at Union Station (401 S. Jackson St) which will be open Monday, Feb. 8: 10 a.m. – 5 p.m. and Tuesday, Feb. 9: 7 a.m. – 8 p.m.
A first class stamp will allow you to mail your ballot in, but don’t forget to have it postmarked by Feb. 9 to count. (Here’s the voters’ guide in case you’ve misplaced yours .pdf)