by Doree on October 15, 2009
in PhinneyWood Neighborhood

Our partners at MyBallard attended last night’s Seattle School District meeting on proposed new school boundaries. More than 200 people packed into Ballard High School’s library to express concern and even outrage at a proposal they felt would unnecesarily split neighborhoods and that would not guarantee younger siblings could attend the same school as older siblings. Read the full story here. 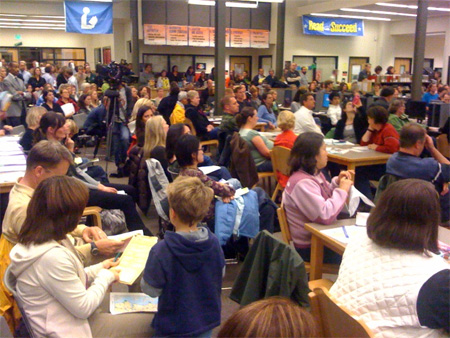 The school district is holding more community meetings over the next several weeks, before voting on the proposed boundaries on Nov. 18.

Phinney Ridge parents Mark and Sara Schiller are emailing a petition to parents, along with a sample letter to School Board Members, expressing their concern that their younger child will most likely not be able to attend the same school as her older brother.

The petition is part of a website called Keep Our Kids Together, which includes a ton of information about district schools, boundaries and organizing efforts.