by Doree on October 6, 2009
in PhinneyWood Neighborhood 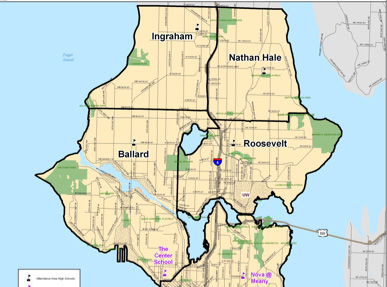 As part of the Student Assignment Plan (.pdf) which was approved in June, the district was given the green light to draw boundaries around each school so students will know where he or she will go to elementary, middle and high school based on their address. There will be no more district-wide open enrollment to apply for schools.

The district will hold informational meetings throughout the city to hear feedback on the attendance areas. The meeting for our area will be held at Ballard High School from 6:30 to 8:30 p.m. on October 14th. The School Board will vote on the map on November 18th. The entire plan will be implemented in phases starting in the 2010-2011 school year.