by Chris Maykut on September 8, 2009
in PhinneyWood Neighborhood

We routinely get reports about drug deals happening in broad daylight on side streets in our neighborhood. Most recently, Erica emailed us this weekend:

My neighbors and I saw a sketchy guy on Dayton Ave N. and N. 73rd this afternoon looking suspicious, hanging out on the corner apparently waiting for someone. He was emaciated and pale as a ghost, and bore a striking resemblance to Steve Buscemi’s character in Fargo.
I think I did a pretty good job scaring him off…he was probably in shock being told off by a mom in a station wagon.

She called the police, but the guy was gone by the time officers arrived.
People in neighborhoods around the city are debating ways to halt this kind of crime. Today, MyBallard reports that Ballard folks are so fed up they’re putting up large signs letting drug dealers know they’re being watched and reported. 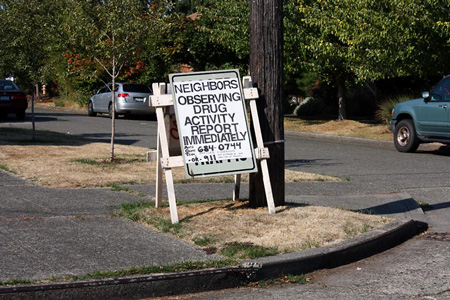 What do you think about putting up signs like this in Phinney/Greenwood? Do you think it would scare off criminals? Do you have any other ideas?