by Chris Maykut on August 27, 2009
in PhinneyWood Neighborhood

A second penguin has died at the new Humboldt Penguin exhibit at the Woodland Park Zoo. 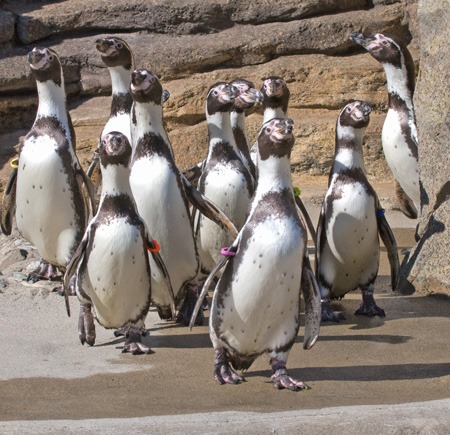 According to a press release sent out today, 21-year-old “Burkles” died Tuesday night from complications related to a possible case of avian malaria. The bird had been undergoing intensive treatment, including a blood transfusion, since the onset of the symptoms last week. “Penguins are known to be especially prone to avian malaria. However, like other diseases spread by mosquitoes, avian malaria is not typically a major concern in the Pacific Northwest because of our relatively small mosquito population,” said Dr. Darin Collins, Woodland Park Zoo Director of Animal Health. “It’s important to stress that zoo visitors are not at risk. Neither birds nor mosquitoes can transmit avian malaria to humans,” Dr. Collins added.
This is the second penguin death this month. It was thought that the first bird died after ingesting sealant material from a pipe. Subsequent tests done on that bird revealed the presence of avian malaria, which may have contributed to his death. Three other penguins are showing minor symptoms of avian malaria and are undergoing treatment. The zoo has sent in blood samples to the lab and results are due back within ten days. (Photo: Dennis Dow/Woodland Park Zoo)

Next post: Greenwood Park set to party on Sunday