by Chris Maykut on March 14, 2009
in PhinneyWood Neighborhood

About one hundred people attended a Saturday morning town hall at the Phinney Ridge Neighborhood Association with Representatives Mary Lou Dickerson and Reuven Carlyle. “We haven’t seen a turnout for a town hall like this in… forever,” Dickerson said to the crowd. 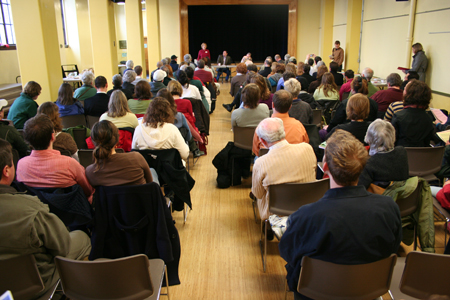 The issue on the minds of many at the town hall is funding state programs in light of the $8.5 billion deficit. “We have in previous sessions set aside a rainy day fund,” Dickerson said. “But we didn’t know the rain was going to be quite like this. The rain turned into a hail and a lot more.” State revenue is down 9.1% compared to last year. “We have some tough choices to make,” Dickerson said, explaining it will be a mix of cuts and revenue increases. 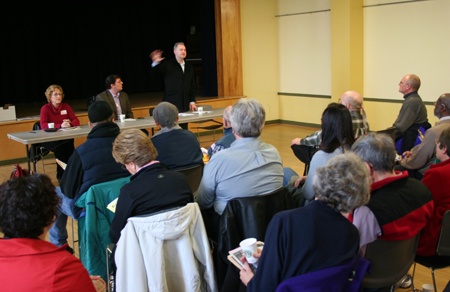 Much of the discussion focused on public education. “I just feel really strongly that we have to figure out not only how we’re going to fund it at higher levels, but we also have to get a higher level of outcome with those dollars, because the financial implications are so serious,” Carlyle said. He spoke about House Bill 2261, the education reform bill that passed the House last week. “This is a big deal for us,” he said, calling it a “moral issue” for the state. Other questions ranged from the environment to health care, domestic partners to the Viaduct. 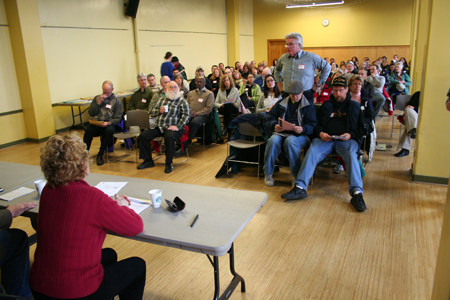 One of the questions that received a loud applause from the crowd was a suggestion for the state to look at a graduated income tax. “To fund the state government on a sales tax is very distressful,” a woman said. “We all know that we have the most regressive tax structure in the country,” Carlyle said. “But the fact is we have a structural and constitutional problem, we have a huge, huge political problem.” He suggested moving toward a progressive model that linked taxes to specific programs so taxpayers had “ownership” in what they’re funding. “Now’s the time to have courageous honesty about what it takes to adequately fund the state of Washington’s services,” he said.
There were so many questions from the crowd, organizers extended the one-hour event to another hour. But a salsa dance class had the room scheduled, so everyone packed up their chairs and moved to a smaller room next door.

We're a blog about Phinney Ridge and Greenwood news, events, and more... Send us a news tip at [email protected]eywood.com